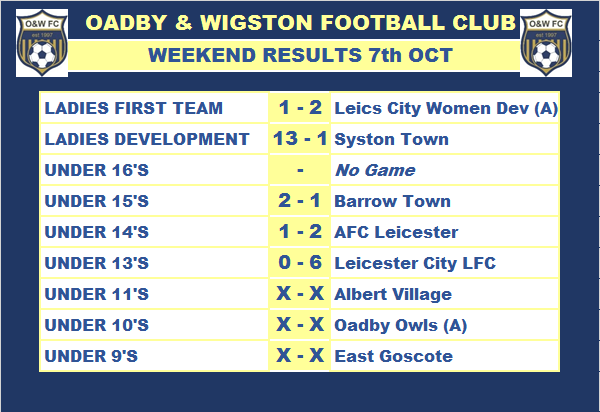 A weekend of mixed results in Cup and League action for our teams.

The Ladies bowed out of the FA Cup with a narrow 2-1 defeat away to Leicester City Women’s Development. Phillips-Poole with the early goal before two second half goals from LCWFC got them through to the First Round.

The Ladies Development continued their impressive start to the season with a resounding 13-1 victory at home to Syston Town, taking them up to 3rd in the Ladies Senior League. Captain Rhea with a 2nd Hat-Trick in 3 games and goals for debutants Anna, Grace and Lotte. Further goals were scored by Emily S (2), Megan, Beth, Emily M and Becky.

The Under 15’s recorded a 2-1 victory at home to Barrow Town, a first victory of the season for Mark Neale’s team takes them into the Semi-Finals. Well done girls.

The Under 13’s lost 6-0 at home to Leicester City Ladies.

League action for the U14’s saw them lose 2-1 to AFC Leicester in a closely fought contest that no one deserved to lose.  A great effort from the girls should see them pick up points soon.