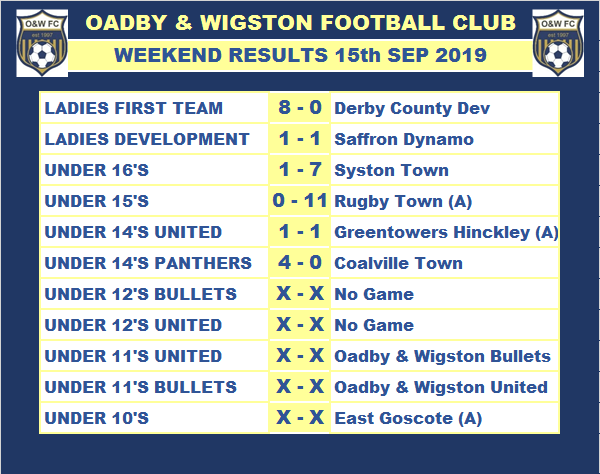 Here’s the weekly round up for the 15th September.

Ladies Development kicked off their campaign against Saffron Dynamo, a good team performance and a fine finish from Emily Sowler secured a 1-1 draw.

The U16’s hosted Syston Town.  A difficult game for the girls especially in the first half.  The game did not go their way and they were 5-0 down at half-time.  It could have been more but for Megan in Goal. Second half produced an improved performance with Libby scoring at the end of the game. Final Score 7-1.

Our U15’s kicked off their season with a tough game away at a strong Rugby Town team. The Girls kept plugging away but succumbed to the consistent pressure of the Rugby Team losing 11-0.

U14’s United had a 1-1 draw with GreenTowers, Rubie Richards curled in a stunner from 20 yards to rescue a point.

Our U12’s had no games this weekend.

The U11’s had a Oadby & Wigston Derby with the Bullets coming out on top vs United.

U10’s had a tough trip to East Goscote.